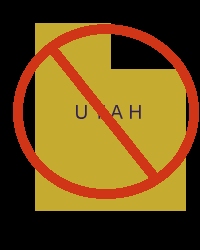 Next to the "It's a small world" ride in Disney Land, it's the closest thing to hell on earth. Here's what you'll be cursed with if you don't heed my warning:

I can't say enough bad things about Utah. Nobody in their right mind would live here by choice. I'd almost consider living in Alabama over Utah. Almost. A good test to see if someone's mentally sound is to give them the option to live in Utah or Alabama. If they choose either, they're wrong. It's a trick question: death is the only sound choice.