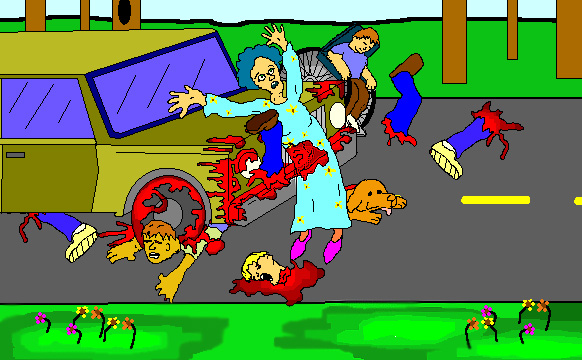 People are always bitching about violence on TV. I recently had the misfortune of watching TV (bad idea), and now I see why they're bitching: there's not enough violence on TV! Man, everything on TV sucks. It's hard to explain how bad it is. To help you get the idea, imagine a fat, blistered, zit covered ass. Now keep that image in your head for 6 hours. That's what it's like to watch TV.

Okay, that was bad, I apologize. Anyway, we need more violence on TV, because what's on now is weak. Nobody wants to watch 'Friends,' with some asshole that calls himself "Chandler" or whatever the hell his name is. That's bullshit. I say we have a show where it's just a guy that runs over people.

So anyway, back to my car idea. This guy runs over people because he feels like he should give back to the community by cutting down its population.

If we had a few shows like Rambo on TV all the time, things would be a lot better. All those dipshits bitching about violence having an adverse affect on youth need to pull their heads out of their ass. Violence builds character, everyone needs violence every once in a while to keep them in check. We don't want to raise a nation of wimps. I'm too tired to continue this bullshit.