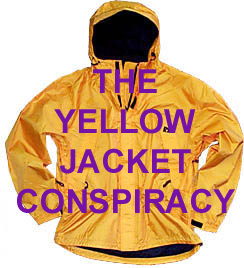 For the last year or so, I've noticed a disturbing trend other than music. This trend is what I've deemed to be The Yellow Jacket Conspiracy, or the assimilation of free will by a powerful force called stupidity. It's a conspiracy of epic proportions lead by those who wear the yellow jackets against those who don't. Chances are that you've seen them before. Maybe at school, work, or even in a movie. 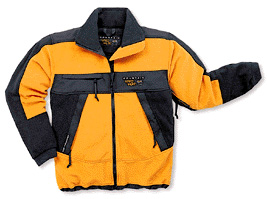 The jacket can be seen in the movies "Jackie Chan's First Strike," and "The Virus." It's a trend that knows no end. Everyone seems to be wearing one these days. It's not just yellow either, the colors red and blue are also significant. The conspiracy leaders and proponents wear yellow, officers wear red, and the workers wear blue. The jackets have a very distinct look to them, so you'll know one when you see it.
Nobody in their right mind would buy these horrible jackets which leads me to believe that the victims have been affected by some type of "dipshit" ray, the effects of which can be seen in Holly Wood's Paulie Shore, and John Leguizamo. The dipshit ray makes the victim think he or she is important by engineering a tightly knit communistic community of snow boarders, punks and sluts, otherwise known as teenagers. These so called "teenagers" wear baggy clothes, listen to shitty music (See Bush, Live, and Backstreet Boys for more on shitty music), and they all eat at Taco Bell (possibly one of the worst eating establishments... ever).

What's worse is that once you've been infected by the dipshit ray, nothing short of a kick in the ass can save you. Don't be fooled. Don't join the legions of dumbasses, don't buy an expensive yellow jacket just because it's the "in" style. Grow a pair and be yourself. To hell with mediocrity.

I can't comprehend how easily people are fooled by this bullshit these days. Is anyone out there with me? Drop me a line and tell me I'm not alone.