Narrowing down the worst songs of 2004 to a mere eleven was possibly the hardest thing I've ever done. What, with Jessica Simpson's "ReJoyce" Christmas-exploitation album, Lindsay Lohan's aural holocaust, "Speak," and Celine Dion's pretentious bullshit "Miracle," and by the way, I didn't think it was possible for me to hate Celine Dion anymore than I already did until I saw the cover of her newest album and accompanying calendar for the modern "grrrl power" super-bitch who finds solace in Dion's brash self-righteous smuggery. Alas, I used some restraint and narrowed the list down to eleven. Here they are:

Other than the shitty song (which I'll get to shortly), the U2 Vertigo commercial uses the same black silhouette style as every other iPod commercial with one exception: Bono's face (the lead singer) is visible along with the rest of the band. Every iPod commercial was the same until U2 came along and took a shit on convention. 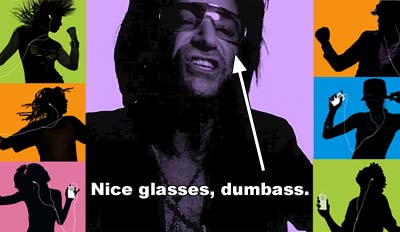 As sanctimonious as U2 tries to be, the reason their faces are lit during the commercial isn't because they're larger-than-life rock stars, but rather, because they're not. When was the last time U2 had a hit? Or a flop? Or anything for that matter? Their last major release was in 2000, an album which was so inconsequential that merely labeling it as such bumps it into a lesser category of sucktitude (but just barely, so eat shit). If their faces weren't lit up, nobody would know who they were except for the most diehard U2 fans, and nobody cares what they think.

As for the "Vertigo" song itself, it's a mix of twangy guitars, unnecessary spanish, and Bono's stupid glasses. By the way, just because a singer wears stupid goggles doesn't mean that they're suddenly cool or hip. Oooh look! Bono the rock star is wearing redneck Nascar goggles, let's all fellate him for being so rebellious; take that Hollywood! They're still the same goggles that dumbass Nascar fans wear to every boring Nascar "event." Man I hate Nascar. And while I'm at it, here's a quick open letter to the NASCAR community: quit writing poems about Dale Earnhardt. Nobody cares. And no, it wasn't NASCAR's fault for not making the tracks wide enough. Nobody would watch NASCAR if it weren't for the wrecks because it's BORING. You love the wrecks because it gives you people something to talk about in your boring lives; don't get all teary eyed when one of your redneck heroes bites it, you hypocritical turds. The wall won, get over it.

Anyway, back to Vertigo: this song sucks so much because of the unique tag-team trio of shitty music, the forced chic of iPod ads, and its stupid fan base. I looked around on some U2 message boards to see what the fans were saying about this song and its turgid lyrics, here's what fan member "Bob" has to say:

Vertigo actually has some seriously heavy lyric - but I bet most of mainstream radio listeners will never know what they mean - I love that! It makes me feel priviledged [sic] to know what the man has to say - there are so many invaluable messages in their albums, certainly this one will be another thought provoking and life influencing scripture.

Here's a sample of the "seriously heavy lyrics" in Vertigo:

And who could forget this poignant verse:

Yeah, real heavy lyrics, dipshit. When Bono's not mumbling like an idiot, he's trying to be emotional by flailing his arms in the air like he's so overcome that he can't help but bellow out a limp-dick line like "I can feeeeEEEEEEeeeeeel." Pussy.

2. How To Dismantle An Atomic Bomb - U2 - Miracle Drug

Coming in at #2 is "Miracle Drug" from the same album. When this album first came out, people wouldn't shut up about the hype that "U2 has made a triumphant return to its rock and roll roots." Triumphant? What exactly has U2 "triumphed" over? The only thing triumphant about U2 is their uncanny ability to produce the same cookie cutter sound that's slowly crippling originality and innovation on airwaves around the world. Congratulations you hacks, you've made FM radio unlistenable.

Bono is 44. He's too old to "rock." I know people have been saying the same thing about Rolling Stones for years now, and every time the Rolling Stones go on tour, they prove their critics right. Give it a rest. I don't even blame U2 for this, it's you stupid fans. Maybe they'll stop annoying us with obnoxious commercials if you morons would stop lapping this shit up like anti-freeze at a petting zoo.

Yet another fan on a message board had this to say about "Miracle Drug:"

I think that Bono turns pop culture upside down with the line "I've had enough of romantic love."

Wow, how profound. Look out pop-culture! Bono has had enough of "romantic love." Here comes Bono and his idiotic fans to make ambiguous jabs at you.

3. How To Dismantle An Atomic Bomb - U2 - Sometimes You Can't Make It On Your Own

zzZZZZZzz.... YAWN. So let me get this straight: U2's "triumphant return to its rock and roll roots" includes a teary song about his dad's struggle with cancer? Rock on you frauds.

4. How To Dismantle An Atomic Bomb - U2 - Love And Peace Or Else

If there was a list of things a pacifist should never say, "or else" would probably top it. Everything about this song is stupid. Love and peace or else? Or else what, you pussies? What are you going to do about it? Sing another crybaby song for your crybaby fans? Tough shit bitches, war kicks ass.

Can't you hippies just piss off and surrender somewhere quietly for once without singing a song about it?

5. How To Dismantle An Atomic Bomb - U2 - City of Blinding Lights

6. How To Dismantle An Atomic Bomb - U2 - All Because Of You

This is the one song on the album that U2's arrogant fans can't come to a consensus about. Some believe it's a song about life, some death, and others God. One thing I think everyone can agree on is: nobody cares.

Great song, if you ignore the ho-hum music and the fact that "romance" doesn't rhyme with "distance." This song exemplifies the reason I hate songs with lyrics. Listen you dolts: if a song has a "message," then it probably doesn't matter because more often than not, song writers compromise their message for the sake of making a song that sounds good, or they compromise the music for the sake of pushing their shallow agenda. Maybe U2 wouldn't suck so hard if they stopped preaching and started rocking instead. Of course, that's difficult to do with Pantera holding a near monopoly on all things that rock.

8. How To Dismantle An Atomic Bomb - U2 - Crumbs From Your Table

This song is about how America and its wealthiest people don't do enough to help solve world hunger. The title suggests that crumbs from our table could help starving people in Africa. Bono indicts America for being hypocritical with these lines:

Would you deny for others
What you demand for yourself?

Bono could not be reached for comment as he was stepping off his private jet and into his limousine.

9. How To Dismantle An Atomic Bomb - U2 - One Step Closer

10. How To Dismantle An Atomic Bomb - U2 - Original Of The Species

This song was supposedly written about the daughter of guitarist "The Edge." Yeah, that's his nickname: The Edge. I used to think names like "The Edge" or "Spike" were cool, but then I turned 12.

The only way I could ever respect him is if he shouted some stupid catch phrase before every concert like "WATCH OUT! THE EDGE WILL CUT YOU!" That might almost be stupid enough to be cool again with the dumbass hipster crowd, until the next stupid trend shows up at Hot Topic for you to oversaturate and ruin.

"I don't know why, but we always had this belief that there was something sacred about our music, that it was almost holy."

-Bono, pompous asshole and lead singer of U2

That wraps up the list of the top 11 worst songs of 2004. I wanted to list a few honorable mentions, such as "Maroon 5" and their crappy synthesized vocals, but I don't have the time or the patience to listen to any more of this garbage. Piss off.