For those of you who don't know who Bill O'Reilly is, he's the asshole who wrote this book: 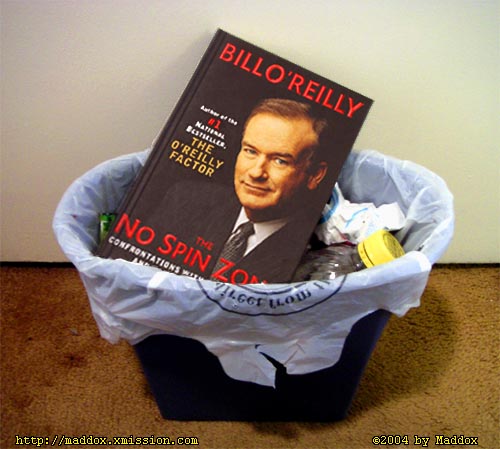 This guy is the epitome of narcissism, and coming from a guy whose website is titled "The Best Page in the Universe," that's saying a lot. If I had to describe Bill O'Reilly in a phrase, it would be "sock-sniffer." You know the kind of guy who comes home from a long day of work, his feet have been sweating all day, his socks are ripe with the pungent aroma of stale milk and wet leather, and after he finally sits down and takes his socks off, but just before he throws them in the hamper, he takes a quick sniff to sample his odors.

O'Reilly wouldn't be such a bad guy if he would quit crying for a few minutes, step back, re-evaluate his life, and realize that he's a giant blubbering vagina. In June of 2003, O'Reilly attacked the only form of media he was powerless in: the Internet. In his "Talking Points Memo" segment, he whined that "nearly everyday, there's something written on the Internet about me that's flat out untrue," continuing with his theory that "the reason these net people get away with all kinds of stuff is that they work for no one. They put stuff up with no restraints. This, of course, is dangerous..." Yeah, real dangerous Bill. Next thing you know, people will get the crazy idea that they have the right to express their opinions as they see fit. Who knows? Maybe this idea will catch on and they'll add it to the Constitution of the United States, giving it a catchy title like "freedom of speech." What do you think of that you sock-sniffing bog trotter?

When Bill feels threatened enough, he goes after the people who say these "vile" things about him. For example, his much publicized tirade with political satirist Al Franken ended with FOX News lawyers being laughed out of court.

No, Bill, the reason we "get away with all kinds of stuff," other than it being our irrevocable right to do so, is not because we don't work for anyone; it's because if the case against Al Franken taught you anything, you can't do anything about it! Here's the dilemma Bill O'Reilly faces every day: let the people who attack him on the Internet go, or talk back and give these people publicity. Al Franken's book probably would have never done so well had FOX not made a fuss about his satirical use of the phrase "FAIR AND BALANCED," and big blubbering Bill won't admit it.

Everything about this guy is obsessive. He speaks with an obnoxious cadence and rhythm, careful to chant the same handful of phrases over and over again. His entire repertoire of insults range from the versatile "ideologue" (oh no, don't call me an advocate of a particular ideology, anything but that! Dumbass), to "demonizer," and "ridiculous." In fact, he repeats these phrases on his show, "The O'Reilly Factor," so many times, you could play a game of Bingo while tuned in. Simply print out the following sheet and mark a square each time he does or says anything listed. You win when you get 5 in a row (horizontal, vertical or diagonal):

Bill O'Reilly gets a major chubby every time he says the phrase "fair and balanced." That's my theory anyway, otherwise he wouldn't say it in spite of the fact that FOX News' slogan is: "we report, you decide." I love that slogan, because it makes me feel empowered. They report, I DECIDE! Wow, it's almost as if I'm being reminded that I still have the capacity for critical thinking, but only insofar as I tune into their network for the delightful and not gruesome Gretta Van Susteren. Here's a quick question to the executives at FOX News (because I know you assholes will eventually read this): why do you keep calling yourselves "fair and balanced?" Shouldn't we DECIDE whether or not you're "fair" and/or "balanced"? Is it even possible to be fair and unbalanced? Just let it go, it's not witty, it's not clever. It's not even catchy. Let it go.

During an interview with NPR's Terri Gross, Bill was quoted as saying: "don't take your ire out on my product because you don't like me." Hey Bill, isn't that the whole premise behind a BOYCOTT? Big blubbering Bill chose not to drink Pepsi when they signed rapper Ludacris to do commercials, yet he expects people to go out and buy his shitty new book even if they don't like him (don't take my word for it being shitty, check out what people are saying on Amazon).

Speaking of his shitty new book, there's a quote in it saying "in order to be truly successful you have to be brutally honest with yourself. Excuses and rationalizations have to be put aside. You must define your own life," continuing with the definition he's giving you for your life "[and] not let others do it for you." Wow, thanks Bill! You condescending son of a bitch. As if he wasn't already a giant self-collapsing vortex of hypocrisy, there are literally thousands of other examples I could cite of him "defining" people's lives. For example, regarding people who support Michael Jackson, he said "all Americans should remain on the sidelines and watch the process." Oh really? Does that include you, Bill? Or are broad sweeping generalizations about what "Americans should do" inapplicable to cranky, joyless blowhards?

Since Bill O'Reilly is such a cry-baby bitch, I have decided to send him a bottle of Johnson & Johnson "no more tears" shampoo, along with a box of tampons to help with his constant PMS: 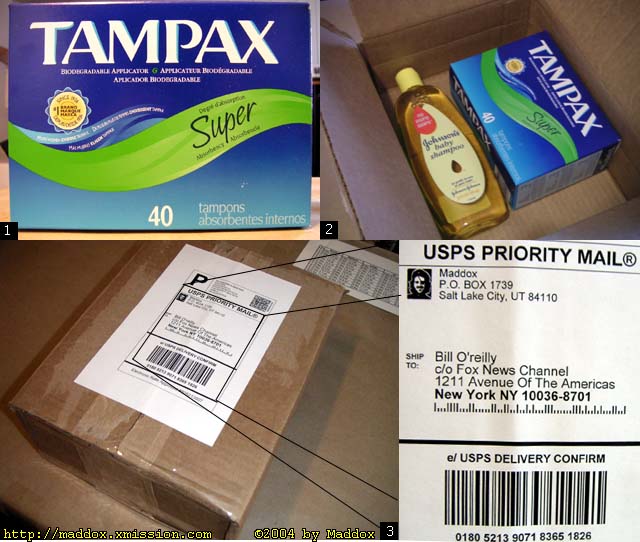 I also sent him this letter along with the package:

I hope you find the tampons and shampoo useful. Please continue to enlighten millions of Americans with your fair and balanced journalism day after day. I know your website is only ranked at 13,553, so if you would ever like some free publicity to help get your site going, I'd be happy to interview you on my site.

Careful not to soak up too much Bill, there won't be anything left.