Fashion tips for women from a guy
who knows dick about fashion.

Before I begin, I should warn you that I know dick about fashion. It's not just a clever title to get your attention, though it's admittedly clever (I'm honest enough to admit when something is brilliant, even when it's my own writing).

You shouldn't read this article if you're a woman with low self-esteem. I don't need my inbox filled with emails from teary-eyed women reaffirming how astute my observations are by shrieking at me for ruining their lives.

Women get away with murder in our society, especially when it comes to the visual pollution they call fashion. So I'm going to do what few people—few men—have ever done by criticizing you. Sure, you may be thinking "but Maddox, people criticize women's fashion all the time!" Yes, but not men, and definitely not badasses like me.... Until now.

This makes you look pregnant: 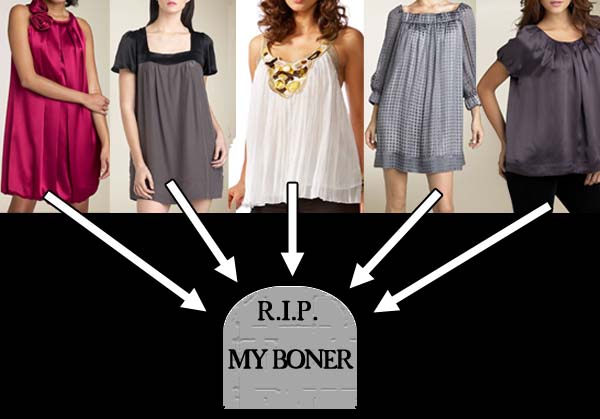 I don't know what this style is called since every retailer comes up with their own "clever" name for it, so I'm just going to call them tit curtains because they look like curtains draped over your tits. You might as well be wearing a burka. It's one giant formless piece of cloth draped around your waist. There's a reason pregnant women wear clothes like this, and it's because it usually looks good on them in lieu of a beekeeper outfit. You're not pregnant, so cut that shit out.

What boggles my mind about tit curtains is that it's becoming trendy, right up there with Castro hats. I don't get it. If I had boobs, the last thing I'd want to do with them is cover them up with curtains, though I'd probably eventually cover them with curtains when I'd exhausted everything else (oil, soap, other boobs, my hands, the lid of a photocopy machine, the mouths of other lesbians, etc). Quit disrespecting your chest hams.

Crocs look like shit and they make your feet smell. 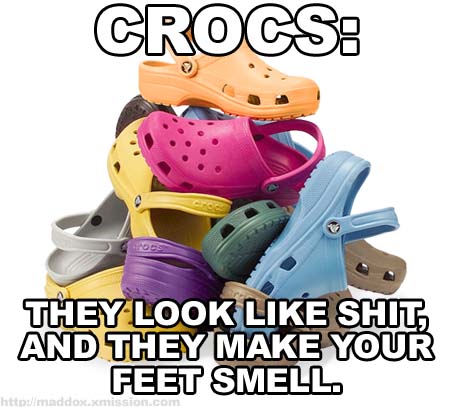 When I see people wearing Crocs, I know immediately that we have nothing in common, and that we could never be friends or have any meaningful kind of relationship. They come in every color imaginable yet look bad with every other article of clothing ever created. The only thing that goes with Crocs is social ostracism.

To their credit though, Crocs serve as an excellent idiot barometer; you can tell a lot about people wearing them. For example, Amazon.com suggest products that other customers have purchased based on the item you're shopping for. Here are the suggestions for Crocs: 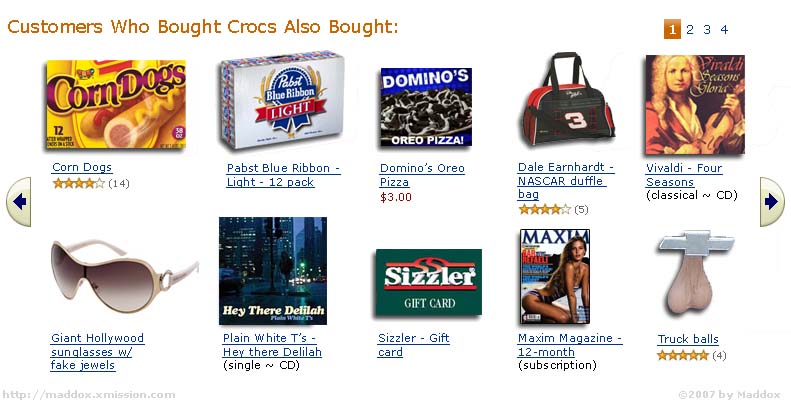 When it comes to shoes, there are usually three deciding factors: quality, price, and style. Some shoes are cheap and stylish, but poor quality, while others are stylish and durable, but expensive. Crocs usually go for $30-$60, which doesn't sound like much for a shoe, until you consider that what you're really paying for are melted pellets squirted into a cast-iron mold in some province in China. Crocs have the rare combination of being expensive, poor quality, and ugly. It's quite a feat for one shoe to suck this bad.

People who wear Crocs go on and on about how comfortable they are, and how it's supposedly odor resistant because it's made out of some kind of anti-bacterial foam. Great point, dipshits! You know what else it's resistant to? You getting laid. Then as if the shoes weren't disgusting enough, Crocs introduced a product called "Crocs butter" that's supposed to restore that illustrious injection-molded sheen to those gaping holes they call shoes: 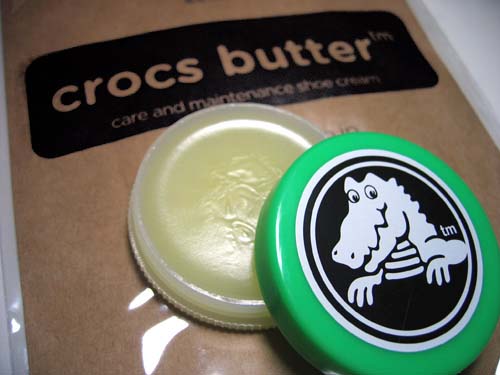 You know that feeling you get when you're full and slightly nauseous and you burp and you can taste the partly digested food in the back of your throat? There isn't a word in the english language to succinctly describe it, but I will hereby refer to it as: croc-butter. 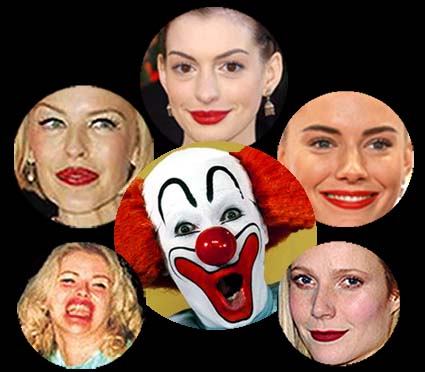 There are very few people who look good in red lipstick, and those people usually juggle for a living. I once met a girl who was able to pull it off, so I let her buy me dinner. Later that night she was making out with my wang, when I realized that all that lipstick was rubbing off. So I evacuated my moan-maker from her face hole, took some silverware for my trouble, and snuck out of her tent.

Red lipstick looks horrible on most women, and all men. The bright crimson hue is an unnatural abomination pushed upon your face by cynical cosmetic industry scientists. I'm sure somewhere in a laboratory, two scientists are high-fiving each other, laughing at all the bullshit new names for shades of red they invent. There have been literally thousands of names for the same color of lipstick over the years, yet there are only about 3 shades of red: red, dark red, light red. Period. And I mean that grammatically, and not menstrually, though the context makes sense now that I think about it. They just make up names as they go along, and you idiots keep buying the same three shades of red over and over again:

Here are some actual names for shades of red lipstick: berry juicy, candied apple, midnight red, love that red, volcanic red, red velvet, red reinvented, cherry desirable, opulent garnet, royal red, etc, etc. You know they're just making shit up when they start using abstract concepts like "love" and "desirable" in the name. Most of the shades are indiscernible from each other, but women insist that there's a difference. So I went to Revlon's website and took two of these colors for a comparison:

Yes, these are actual Revlon lipstick colors. I'm not making this up.

Insecure women with boring faces lap this shit up because they think "hmmm.. what does my face need? Oh, I know! A giant hokey shade of red that isn't even found in nature."

You are not a Cuban dictator.

Fidel Castro hats were made to be worn by Fidel Castro. Not hipster losers trying to look ironic. Unless you have a beard and you led a coup in 1959 to establish a Marxist socialist state in Cuba, take it the fuck off. It wouldn't even be so bad if you were Cuban, but you're not. You live in a midwestern suburb and you shop at Hollister. Oh yeah, that reminds me of this store I hate called Hollister. It's the greatest cultural fraud perpetrated upon mankind, and it looks like this:

Did you think your Hollister store was unique?

"But Maddox, how did you get a picture of that distinctive looking store from my mall?" Surprised? That's because every Hollister store is exactly the same: 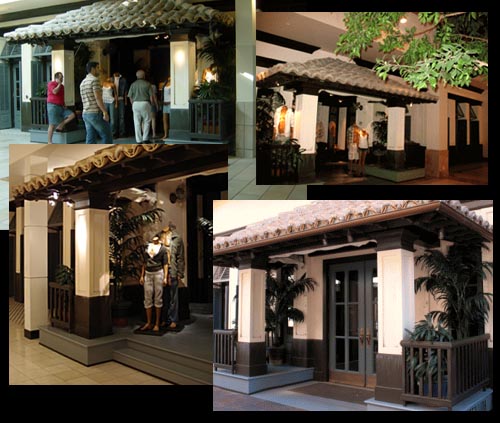 The store is made to look unique when it's not, so what you think you're seeing is a clothing store, but what you're actually seeing is a lie.

Every store has the same fake facade with the same fake plants out front, with the same fake terracotta roof, and every store plays the same pop/punk/emo soundtrack. Everything in this store is engineered to create a fake image, right down to the way the store smells. Think that musky cologne you smell when you walk by the store is an accident? Some marketing dickwad was paid top dollar to make you have an involuntary brand association every time you smell that scent. All so they can sell you a hat popularized by a Cuban dictator for the low low price of $20. Choke it down, dipshits!

Self-aggrandizing "hottie" shirts make you look like a bitch: 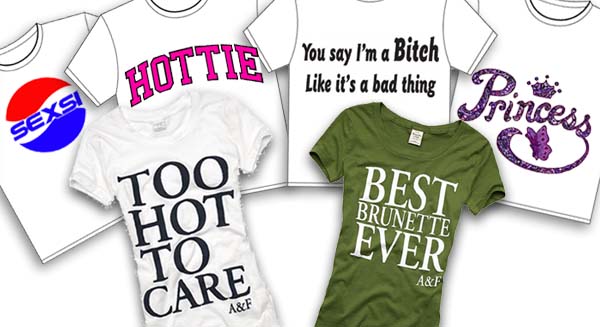 There are two types of girls who buy these shirts: 13-year-old junior-high brats, and 29-year-old chicks who are too tan and wear way too much lip gloss, and try desperately to look like they're younger than 29. The real problem here is that women who wear these shirts start to believe their own bullshit after a while. The shirt at the top emblazoned with the phrase "you say I'm a bitch like it's a bad thing" epitomises this attitude. Guess what? It is a bad thing. Here is my unabridged definition of bitch:

Nothing screams "bitch" like wearing a shirt that says "too hot to care." Frankly, there's only one person in the world who's hot enough to wear a shirt like that, and her name is Maddilox: 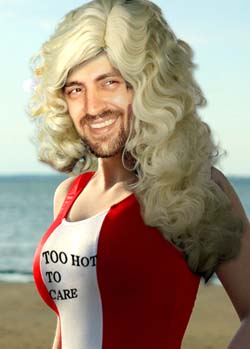 Hello, my head is coming out of a giant vagina. 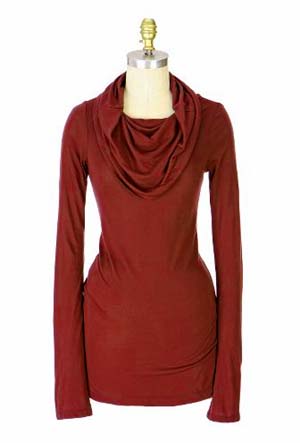 Yes, everyone thinks it looks like you have a giant vagina around your neck. It sounds hotter on paper than it actually is. I'm sure a man invented this style, because it's damn near impossible to think of a combination of heads and vaginas that isn't rad, but this shirt is proof that even an idea as inherently cool as giant vaginas and heads coming out of them can be made lame.

I came up with a design similar to this shirt when I was in first grade. My friend and I were drawing new Mega Man characters, and I drew a giant vagina, except in the middle was a giant eye so it kind of looked like a cyclops with a meaty head, and I called him VagEYEna Man. I sent it to Capcom, but I'm still waiting to hear back from them:

Since this article was originally published, I've received a number of submissions from people who've had Vageyena Man sightings.

4,753,828 women just got their faces packed with practical fashion advice.