Hey Jenny, what rhymes with "canceled"? 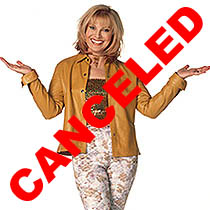 I made a decision about three years ago to stop watching her show entirely because it was pissing me off way too much. I watched it again the other day and nothing has changed. Every show can be summarized in one of the three following categories:

1. Some lardass loses weight, and now she thinks she's "THE BOMB." So she comes out parading her fatass off to everyone in the skimpiest outfit she can find. Nevermind that every other Jenny Jones show focuses on people who "dress too sexy" (in which the audience boos and sneers when they display the before picture, which means that they're no better than the people they criticize), hypocrisy is kosher when it's an ex-fatass who wants her 15 minutes. News flash: nobody cares. What do they want, a reward? They bring the weight upon themselves, then they lose it and expect everyone to throw them a ticker-tape parade for losing what they gained. Way to piss away your 15 minutes you moron. That's another thing, the phrase "everyone gets 15 minutes of fame" is bullshit. Not everyone can get 15 minutes of fame. The earth's population is about 6 billion. At 15 minutes per person, that amounts to over 171,000 years we'd have to spend just sitting around watching people be "famous." To hell with that.

As for the other two categories, I was just kidding: there are none. Every Jenny Jones show is like the one above, with various permutations of the following rhyming words: "geek, chic, teen, obscene, hot, not, mom, bomb" and many others. I've gone through the trouble of translating a few choice show topics to give you a brief synopsis of each:


Translation: I was an ugly skank in high school, and now that I've changed my appearance to conform to the media's perception of what's "hot," I'm no longer an ugly skank. Now I'm a shallow skank!
Translation: Raunchy hags and semi-hookers. Notice how they stealthily snuck the word "talent" into the title to make it seem like a legitimate topic. I have to admit, I totally didn't notice that they were glorifying prostitution since they used "talent" in the topic along with "looks." Otherwise I would have totally changed the channel if I found out it was a talk show about stupid slutty chicks who exploited their bodies to get on television.
Translation: I should be shot for using the phrase "mad player skills."
Translation: Another lame excuse to have another stupid show devoted to make overs. I have to admit though, the topic is pretty clever and sassy. Speaking of sassy, I thought of an alternative title for this episode: this talk show host has a lot of sass, too bad her head is up her ass!
Translation: This one is my favorite because it's a broken sounding rhyme. They didn't even go for the obvious "I'm America's hottest honey, nobody else is quite as money." This episode answers the question that people are dying to find out once and for all: who is America's hottest honey?

The show I watched the other day was about 11 and 12 year old kids who smoke, do drugs, and drink. It was so stupid I almost had a heart attack. They had some 11 year old girl on there who liked to dress sexy, then Jenny Jones being the impartial host that she is, asked the girl questions that everybody wanted to know: "why are you doing it"? I guess Jenny forgot that it doesn't matter why 11 year olds do anything, because they're, get this, 11. The bovine-like mother just sat back nodding her head saying "I can't control her! I've tried everything!" Yeah? Well have you tried GROWING SOME BALLS AND STOMPING YOUR LITTLE SHIT INTO SUBMISSION, YOU DUMB BITCH? She's 11 years old. Do something about it. Holy shit people are stupid. Why is this on TV?

Thank you Jenny Jones for your years of glorifying parents who have "out of control teens" and encouraging stupid kids with bad attitudes by putting them on television. So long Jenny, your show won't be missed.

634,299 People wonder if Jenny Jones can come up with a topic that rhymes with "canceled."