Math doesn't suck, you do.
Every time I hear someone say "I suck at math," I immediately think he or she is a moron. If you suck at math, what you really suck at is following instructions. 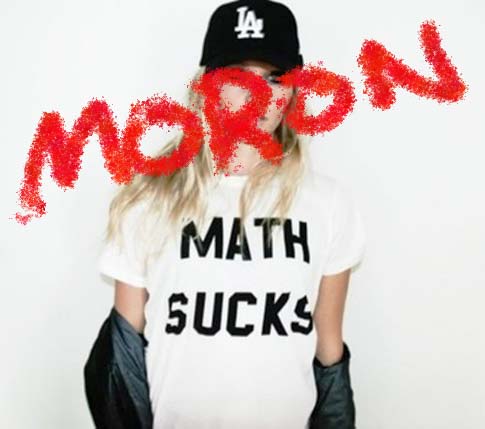 This shirt is birth control.
Sucking at math is like sucking at cooking. I'm tired of eating shitty food because you're too much of a dipshit to follow a recipe. Also, I'm tired of hearing people brag about how they can't cook like it's some kind of badge of honor. It's like a race to the bottom with you people. I always hear people one-upping each other about how inept they are at cooking. If you don't know how to chop up a few carrots to make a decent soup, take your life. Math is exactly like cooking: just follow the recipe. Symbols look confusing? Can't figure out how to solve a problem? All I hear is, "Waaah! Boo-hoo! I didn't read the introduction to the chapter that tells me exactly how to solve this generic category of problems!" Math isn't some voodoo that only smart people understand. It's something that people understand on their path to enlightenment, and it's about as straightforward as thinking gets. And when I say "math" here, I'm talking specifically about the only category of math that 99% of people know about: applied. It's a failure of teachers everywhere to expose people to the much less commonly known branch of mathematics: theoretical. Theoretical math is cool as shit. You know what's not cool? You being an idiot. Math theory involves solving problems like finding patterns in prime numbers, topology and thinking about the different kinds of infinity. And yes, there are different kinds of infinities. Pick up a fucking book some time. 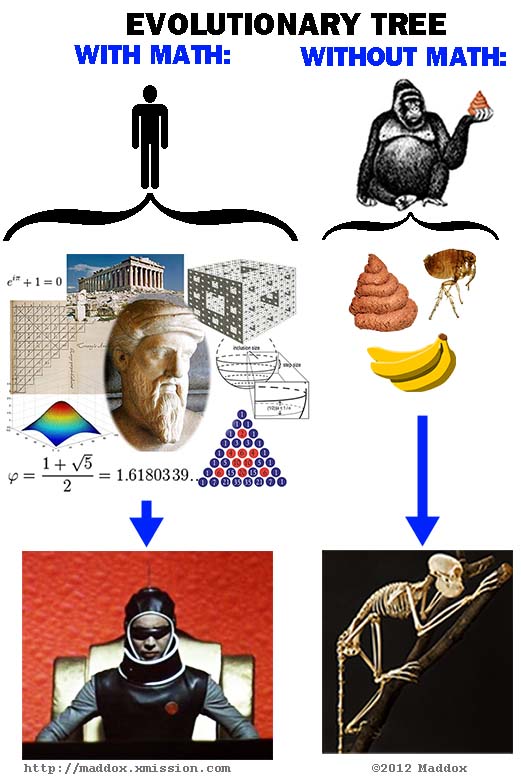 Ever heard of Pascal's triangle? Or the Fibonacci sequence? How the square root of 2 was discovered? Do you know anything about the Pythagorean cult who discovered the "Pythagorean theorem"? No, because you're too busy saying the same tired excuse every other dickhead spews out about math: "when will I ever use this in life?" First of all, if you're leading your life in such a way that you never have to do math, congratulations, you are a donkey. Why is math the only discipline that has to put up with this bullshit? People gladly learn art, music, literature and geography. You'll even nod like a happy idiot when you learn what a haiku is, and you never complain or whine about how you'll never use this in your "life." When is the last time you wrote a haiku, asshole? But when it comes to math, everyone turns into a big pussy and starts PMSing all over the place. The walls, the flag, the teachers, everyone and everything gets splattered by your crimson twat water. Because suddenly you can predict the future and you know that for the next 70 or so years of your life, with 100% certainty, that you will never use math and that you can tune out and go back to doodling because you're too self-important to learn something that ancient people thought was important enough to pass down for your dumbass to learn from. It's far more important for you to practice writing your name or drawing hearts and stars, right? People didn't invent this stuff because they were bored. They invented it to solve real-world problems. Problems that real men had to deal with before your stupid ass was born, like building oil platforms, delivering the correct dosage of medicine and going to space. Not so your dumbass can play "Gardens of Time" on Facebook, although you wouldn't be able to do that without math, either. All higher forms of thinking come from neural connections built by solving the kinds of problems encountered in math. Why should you learn math? Because fuck you, that's why. Learning math isn't about how much or how little you use it at your shitty job. It's about becoming someone who's worth a shit. Don't like it? Tough. People also don't like to work, and if everyone took your shitty attitude towards math and applied it towards work, we'd all be living in shit huts in Africa. As for me, I like computers, the Internet, and riding in elevators. Don't think elevators are awesome? Take the stairs next time, asshole. Tweet

1,650,258 people don't understand the significance of the number in this sentence. Or any number in any sentence.