A tribute to real men.

When did it become acceptable in this country for a man to go from being a rugged, plaid-wearing, beef jerky eating badass to a well-groomed, "metrosexual" girly-boy like Ben Affleck? Affleck recently agreed to be a spokesman for L'Oreal, with L'Oreal quoted as saying "Ben embodies a new generation of men who show their strength in their personality but are not afraid to care for their appearance." Afraid of taking care of their appearances? It's not that we're afraid you assholes, it's that we don't menstruate. What next? Men getting hormone injections so they can breast feed?

"Ben embodies a new generation of men who show their strength in their personality but are not afraid to breast feed their children."

Is it okay that I don't have a sense of style? Is it okay for me to scratch myself? I'm hairy. I like wearing plaid and I don't want to be told how to dress by some dude with a "queer eye." Is that okay with you sissies, or would you like me to package my balls and neatly carry them in a purse? For crying out loud. You're turning us into a nation of pussies.

That's why I wrote this tribute to real men, the kind of men who perpetuate our species, don't know what conditioner is used for, and don't apologize for not wearing makeup. Without further ado, real men: 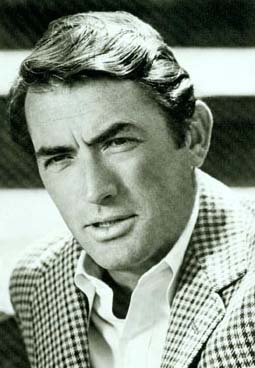 Gregory Peck is a man's man, the kind of man you read about in the bible. A man who came from a time when beating your woman was not only socially acceptable, but encouraged (not that I'm saying spousal abuse is right, I'm just saying that sometimes she deserves it). He has the charisma of Frank Sinatra and the rugged manliness of a lumber jack. Even his last name is manly: "Peck," the phonetic equivalence of a slang term for a man's chest; it's a simple, almost primitive sound like a grunt, straight and to the point without fancy extra syllables and gratuitous punctuation. His default expression is a determined scowl, like he's prepared to introduce you to the business end of his shoe if you look at him wrong.

Unlike the self-serving asshole Christopher Reeve, Peck became chair of the American Cancer Society despite the fact that he never had cancer. His integrity was genuine on-screen and off. Hats off to Peck for being a real man.

If you're asking yourself "who the hell is Aron Ralston," you'd better step back and re-evaluate your life right now. Ralston, the living legend, was hiking up a cliff in southern Utah (probably to do something manly like take a leak off of it), when a giant boulder fell on him, pinning his arm against the ground. Most people would have just died, but did he surrender his life to a mere giant life-threatening boulder? Hell no. He just kept getting angrier and angrier until he finally CUT OFF HIS ARM WITH A DULL KNIFE. This after he literally chiseled away at the bone so he could snap his arm off and free himself from underneath the rock. Yes, you read that correctly, he cut off his own arm with a dull pocket knife.

Since I don't have any credible sources of what happened next, I'm going to go off of the next best thing: hearsay and rumor. After he cut off his arm, he jumped off the cliff and broke his fall with his face, just because he's that tough. Then he got ambushed by a tribe of angry Indians, caught an arrow in his heart, pulled it out and killed all the warriors with it. On his way back a buffalo crossed his path so what did Ralston do? He head-butt it to death, then he found its offspring and broke their ribs just for pissing him off. Then he chopped down a tree with his undoubtedly large penis, built a raft out of it and rafted down the green river. That's the damn truth--more or less. Aron Ralston is a real man and one tough son of a bitch. He deserves utmost respect for being such a badass.

I couldn't find a picture of captain Petursson, so I drew one:

Captain Petursson, the skipper of a trawler named "Erik the Red," was watching his crew gut some fish one day when he saw a shark swimming towards them. Did he grab his skirt and run screaming like some nancy-boy? Hell no! He ran alright, right into the water, grabbed the 660 lb (300 kg) shark by its tail, dragged it to land and MURDERED IT WITH HIS KNIFE!!*$# Holy shit!

Although he's called the "Iceman," I have no doubt this man was born and raised a pirate. How can he not be? He probably eats rocks and shits gun powder. If he were any manlier, he'd start a website where he lambasted morons who emailed him on a daily basis. Captain Petursson is a real man in every sense of the word.

John Hirsch was minding his own damn business in his back yard when a black bear had the audacity to assault him in his own home. Hirsch pulled out his 3 inch knife and called the bear on, circling him like a wrestler in a ring. The bear kept swatting at him, but Hirsch ducked, then stabbed the bear in the face each time it lunged. When the bear finally had enough of its shit ruined, it finally gave up and died like a pussy: its tongue was severed, jaw broken and it had several new assholes ripped into it, making it more aerodynamic (if you happen to be optimistic).

Of course, animal rights groups bitched about Hirsch, saying the bear was just looking for food. No shit? I'm sure the bear would have had no qualm about eating Hirsch, and the dumbass animal rights activists would have gotten a huge chubby if the bear had eaten him. I wish a bear would eat them instead.

That about covers it for this tribute to real men, but there's one more I have to mention: 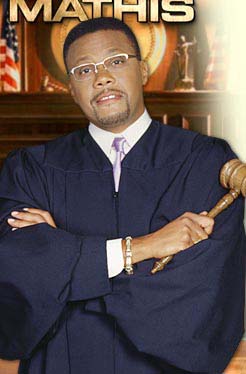 Judge Mathis deserves to be on this list simply because he happens to have the most finely tuned bullshit detector I've ever seen. Nothing gets past him. Sometimes he plays along with someone when he knows they're lying, letting the person build a complex house of contradictions thatched together with bullshit so he can come back and stomp everyone's ass in the court room. Judge Judy, Joe Brown, and "Texas Justice" Larry Joe have nothing on him. Mathis could chew them up and spit them out like a pile of soggy sausages. He's part Shaft, part Matlock (the non-flaccid, non-geriatric part), and all badass. Hail Mathis.

3,052,974 real men came to this page and left convinced of my astute observation of their kind.