I've been getting a flood of email lately from people telling me that they can no longer see my site from work, school, and even public libraries. It seems that a popular web filtering company, Websense, has decided that my site is "tasteless." Specifically, they define it as:

"Sites with content that is gratuitously offensive or shocking, but not violent or frightening. Includes sites devoted in part or whole to scatology and similar topics or to improper language, humor, or behavior."

Not violent or frightening? Bullshit! To prove Websense wrong, I printed out all 400 or so pages from my site and dropped it on some kid's back: 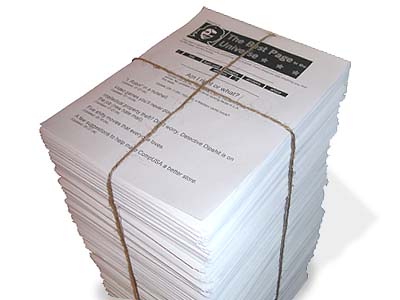 Thanks to me, someone who makes back braces has a job.

What exactly is "improper" humor, and who makes this decision? I searched online for some orthodox committee of judges who decide whether or not a site is worthy of the honorary title of "tasteless," but alas, I found no such authority. I was about to give up when I finally came across a document that explains how the process works:

Good job, Websense. Lazy soccer moms with shriveled, dry vaginas everywhere salute you. Some of the other categories that Websense can block are: health sites, search engines, news sites, and even educational institutions. Keep up the great work, you fascist cocks. Here are a few of my favorites:

Oh no, Lexmark has banned me? Good riddance. Every Lexmark printer I've ever used has been a piece of shit. One time I was trying to print a picture of me so I could give it to a friend to cheer him up after he was diagnosed with cancer, but the printer jammed, and my friend died. Thanks for nothing, assholes.

Since Websense has decided to block my site, I've decided to block Websense for a change. That is, I've blocked the entire company and all its employees from ever visiting my site again. Here's what someone from Websense will see if they visit my site:

Webmasters: take my lead by blocking websense from visiting your site. Get those bastards off your nuts.

Finally, I can't end this article without mentioning a site that has gone out of its way to shut down the best page in the universe. It's called "Mothers Against Maddox;" a site run by a woman who I suspect lives alone with her two cats. For years, I was under the impression that the only mother who wanted my site shut down was my own. I stand corrected:

The first time I saw this site, I suspected it was a prank, but it has been up for over a year now and frankly most people don't have that kind of determination. The original site is hosted on a shitty Geocities account, and since linking to it from here would kill its allotted bandwidth in minutes, I've taken the liberty to mirror the entire site. The original site can be found here.

I think the message she's sending is a good one: I'm definitely a threat and I need to be contained. You see, parents today don't have the time to be bothered by things like supervising their kids and teaching them right from wrong, so what we as a society need to do is ban everything objectionable.

Hell, I even signed the petition. Too bad nobody gives a shit.

The petition to shut down my site had about 80 signatures before this article was posted. With only three hours into this new post, there are about 1200 new signatures on the site. 24 hours later, there are 9,200 signatures, making it the most popular petition on Petition Online.

I've noticed some people posting phone numbers and addresses on the petition. Nice going morons. Don't post phone numbers, and don't call phone numbers posted. Anyone can post any number they want and say it belongs to someone else. Don't be an idiot.

2,761,277 Websense employees have been blocked from my site.