Spanish
Not everything is epic, shitheads.
The word "epic" is one of the most misused and overused filler words in the English language. Here are examples of its misuse on Facebook and Twitter:

If you have used the word out of context, which means any time since 2008, you should stop whatever it is you're doing and start plowing fields, because you lack the ability to form language that doesn't involve mimicking others, and are therefore a cow.

The word epic should only be used to describe two or three things, ever. In fact, here's a comprehensive list of all things epic: 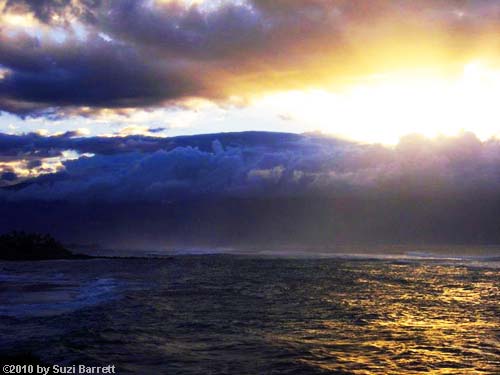 Oceans are "massive and imposing in scale or size;" literally epic. 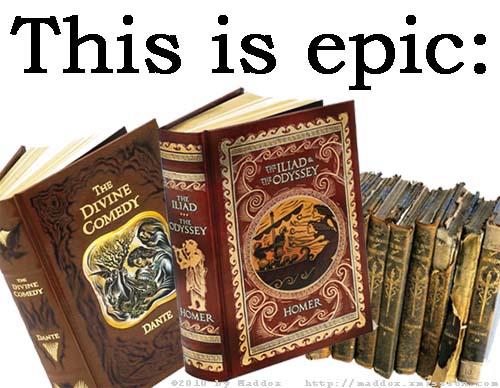 Literary epics are tales of heroism, and are often about voyages across other epic things, such as oceans. I don't know every literary epic out there, but I know that getting "FRONT LAWN SEATS" sure as shit isn't: 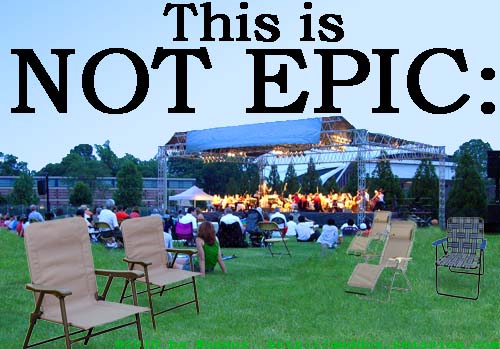 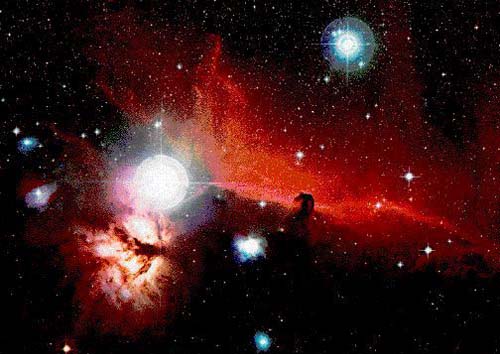 That's it. Unless it's an ocean, cosmic or heroic, it's not epic.

So when you dipshits ascribe the word "epic" to banal things like the new Tron poster (not even the entire movie, just the poster), and children's games like "duck duck goose," you cheapen the word and water it down so it just becomes a sound you make, like a grunt when you approve of something. And it's not just used for approval, it's also used to describe minor disappointments, like having to restart a DVD because it skipped. Now every minor inconvenience is an "EPIC FAIL." And if it's cool, it's not just cool but an "EPIC WIN." And for the record, fail is a verb, and is something you do, like fail at English. The act of failing is "failure," and is a noun. People can be failures, but they can't be "fails." That doesn't make sense. So when you miserable pieces of shit say "epic fail," what you really mean is "epic failure."

There are two reasons why people use it:

1. Because it's a big trendy inside joke with a recognizable template that everyone can exploit in a vain attempt to be funny and fit in. I get the supposed humor of being an ironic idiot, but people who use the phrase aren't being ironic anymore, just idiots. Phrases like "epic [BLANK] is epic" have largely supplanted popular phrases from TV and movies, and now we're inundated with stupid shit like this:

And just an aside: hashtags are pointless, hashtag jokes are stupid and people who use them are giant assholes. The problem with Twitter hashtags, other than the fact that metadata doesn't belong in your content, is that people who use Twitter insist on linking that shit on Facebook, Google Plus, MySpace and every other website and widget they can possibly link to their stupid accounts. You know what, shitheads? If I wanted to follow you on Twitter, I'd sign up for an account. There's a reason people choose one social network over another, and the rest of the world shouldn't have to spend time figuring out the proprietary syntax of your stupid network. If people wanted to receive your Twitter updates on Facebook, they wouldn't be using Facebook. People who link their accounts rarely deign to sign into both social networks to reply to or check comments, but they're happy to share all their #unintelligible @twitter #nonsense #with @everyone #in #the #universe. The whole point of hashtags (or tagging in general) is that it allows people to easily categorize certain posts, and like categories, you should only use them when you're searching for something, not to make some stupid joke about how obscure your "topic" is. Here's what books would look like if categories were mixed with content: 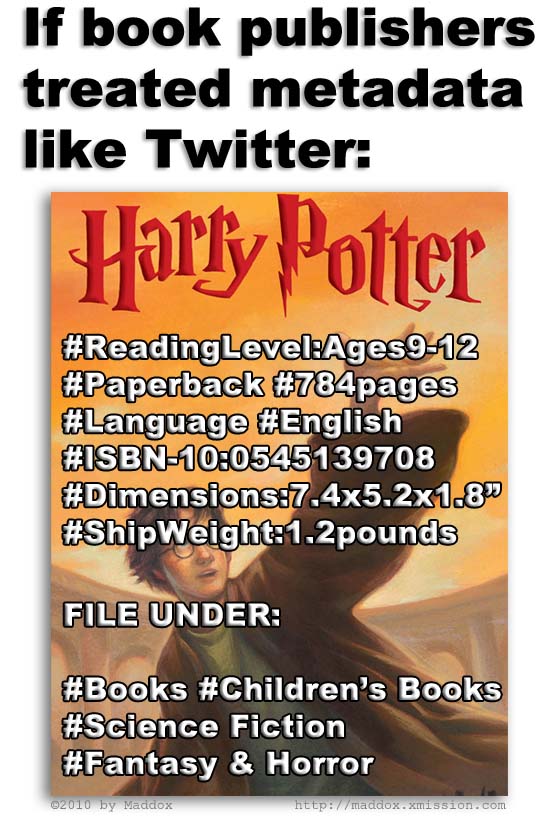 You can't picture your mom saying "epic," just like your mom can't picture her father saying "dope," and his father saying "bad," unless your grandfather happens to be really into hip hop like mine was. Each time a new set of "cool" words come into popular use, it makes the old ones seem dated, and each generation ends when corporations finally catch up and try to seem hip by using the phrases to sell products:

Hot Topic is where cool ideas go to die. Not that I'm suggesting this cookie-cutter language is cool, but it is nonetheless destined to die on the black particle board shelves at your local Hot Topic. The surest sign any trend has had every ounce of life sucked out of it is when merchandise starts appearing in these cultural graveyards. If you're not from the US, Hot Topic is a store found in malls everywhere that exploits sells a bunch of lame edgy crap to angsty teens. If you like black shirts and staying up past your bed time, Hot Topic is the store for you. They sell stupid shit like baggy bondage pants like these:

Also, this new trend where everyone refuses to wear socks makes me want to puke. Hey swamp-foot, how about putting some socks on? I know that has nothing to do with anything, but I haven't updated in a while and I'm not writing a whole new article about you hipster idiots who wear Toms and loafers without socks. That's it. I haven't slept in 2 days and now I'm going to make a pizza, and it sure as shit won't be epic.